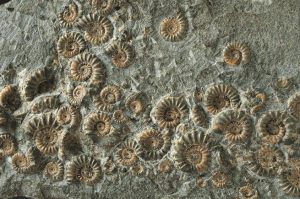 In pantheology the term fossil (from the latin, “dig”), is used to indicate the intact or partial remains of ancient organisms. In general, the term, is attributed to any witness of life, geologically passed (prior to the current era): animal remains such as bones, teeth, eggs, shells; plant remains, such as leaves, trunks, pollen; evidence of vital activity (structures of bioturbation as footsteps); traces related to nutrition  (coprolites).

This term was introduced by Gregorio Agricola, German scientist and mineralogist, to indicate everything that was extracted from the ground by digging; initially it was also used for minerals and for the remains of plants and animals.

THE PROCESS OF FOSSILISATION

The fossilization of an animal rest or a plant is a rare event. In fact as soon as animals or plants die it initiates decomposition. Although the more resistant parts, like shells, bones and teeth of the animals or the wood of plants, resist longer than soft tissues, these elements are often disintegrated by agents of external natural (physical and chemical), such as wind and current water, and also by the action of the necrophagous animals (biological agents).
A complete process of fossilization is obtained from an organism quickly buried after his death, before its decomposition or attack by breaker agents. In most cases, this burial takes place by means of the deposition of sediment, as the sand or mud which transport thanks to the water, the dead organisms. The process of transformation of a living organism in a fossil can last several million years.

Fossils are incorporated in the sedimentary rocks abundantly present in the upper part of the earth crust. Useful to date the calcareous mesozioic rocks are: stromatoliths, ammonites, belemnites are mollusks, Gastropods, brachiopods, echinoderms, crinoids, isolated teeth of the shark and microfossils. The relative dating performed with fossils guide is of enormous importance and is served to the definition and the characterization of the geological periods. The igneous (or eruptive) rocks are devoid of fossils, those volcanic in some rare cases contain fossils of organisms remained buried during the volcanic eruption that has generated. Traces of fossils are sometimes found in metamorphic rocks deriving from metamorphic processes of low intensity on sedimentary rocks.

The criteria of fossil dating is based on biostratigraphy, i.e. the order the successions of sedimentary rocks based on their paleontological content. The fundamental unit of biostratigraphy is the bio zone, understood as interval stratigraphic which contains a determined fossil or a particular association of fossils. A set of bio zones, in practice, constitutes the floor, which is the fundamental unit of the chronostratigraphy, used by geologists for dating the rocks. The set of planes represents the geological time, lasted four and a half billion years, and constitutes the Scale Cronostratigrafica Standard that all geologists use in all parts of the world. The biostratigrafia says that, normally, the lowest layers of the soil are more ancient than the upper ones (geological Steno’s principle of overlapping, see palaeontological Evolution#Tests).

Using this criteria we can compare certain fossils with others found in layers of other places to see if they belong to the same time. This method is based on the guiding fossils, which are characterised by the diversification and the rapid evolution. With the methods of radioactive isotopes and carbon 14 you can have the radiometric dating, which measure the age of the rock in years, but that is less accurate than the method of relative dating.

The typology of the fossils

There are four basic types of fossils:

The vast majority of fossils is located in sediments, i.e. in the deposits formed in the water. The sedimentary rocks are formed in layers. These layers, mainly calcareous and fossils contained, may be used to reconstruct the history of the earth and of the bodies which have succeeded one another in the course of millions of years. Geologists know that the various rock layers were formed in ere and various periods.

Of course, in a sequence, the more ancient layer is formed first and the more recent and overlying as the last one, while others are formed in the intermediate time; but this arrangement, which generally is preserved, can be modified and even reversed by subsequent tectonic movements.

Classification is a process that attempts to sort the bodies on the basis of their characteristics. It is of the hierarchical type, i.e. the objective is to define classes characterized by organisms between similar to those included in other classes. It uses 7 levels:

For example, the vegetable kingdom encloses all the bodies with certain characteristics in contrast with the Animal Kingdom (to which we belong too). Inside of the animal kingdom, then there are several Phylum (mollusks for example which are easily distinguishable from vertebrates), inside the Phylum classes, etc.

One of the most fascinating finds its roots in North Africa, cradle of the ancient civilizations of the Sahara and the progenitor of future peoples of the Mediterranean. The  Niger area is bounded to the north by the massif of the air and hundreds of km further north from the massif of the Adrar and yet by the Tassili-n-Ajjer, that is considered one of the most arid areas of the planet. In memory of a rich vegetation populated by animals and peoples of Africa, there are remaining traces of fossil rivers. Between rock masses and large flat sand,numerous finds of fossils characterize this vast area.

During the Devonian, Paleozoic era, about 380 million years ago, due to various natural factors, plants, fish and other ancient animal fossils were present after the retreat of the sea. The south-east of the Sahara is now a rich source of various fuels. A Palaeontological research shows that this area was a seabed where lived various types of marine animals who then disappeared. As a result of the marine regressions in the course of the geological time, they have preserved their traces, fossilised. Geologically speaking in this vast Saharan area, there are many mines and quarries, where fossils are incorporated into huge rocks, each mine has its own characteristics in terms of age, raw materials and color of the fossils, because they contain specimens of an incredible variety.

TYPES OF FOSSILS IN THE SAHARA 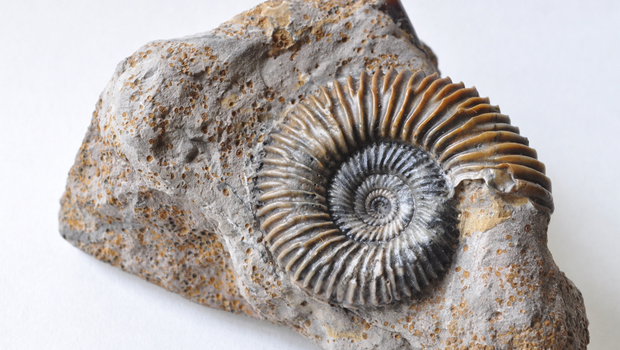 very important Group from the point of view of fossil fuels for both the number of archaeological findings and the stratigraphic correlations and the radiocarbon. Totally extinct at the end of the Cretaceous period, they derive from ancestors belonging to the Nautiloidea.

A very important group of cephalopods, which are distinguished primarily for the shape of the shell. The symmetry is bilateral. The shell is divided into a frontal region undivided where the animal lived and in a rear region divided into rooms. The line of suture between the rooms is very indicative and facilitates the specific recognition. In addition its outline is rather simple and linear, it is modified up to the Ammonites which are often very jagged and almost baroque. Depending of the winding, different forms of the shell are found. Also the external coasts and the presence of thorns and tubercles characterize the various genres.

The dimensions are always medium or small from a few centimeters up to a few tens of cm. There are however also gigantic specimens.

exclusively marine, totally extinct species, we can only assume their style of life. It is believed that the shapes with externally smooth shells were swimmers, often predators. The species with more chops shells were predominantly benthic.

found in marine sediments and rocks. fossils Have been found in localities scattered in various parts of the globe. Numerous also in Italy. 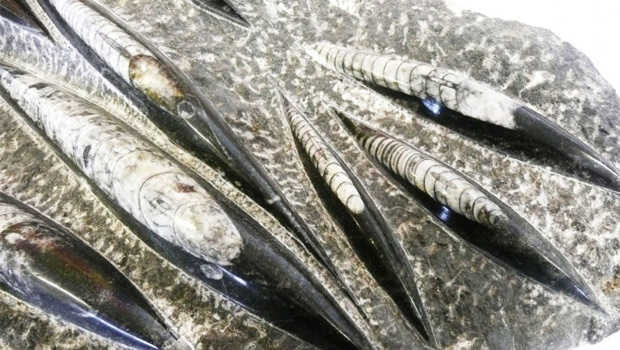 appeared in the Cambrian period, they have acquainted many forms but they are almost all extinct before the end of the Palaeozoic era.

A very important group of cephalopods (animals in which the foot is transformed into tentacles or arms). The symmetry is bilateral. The shell is unique, always in the form of a conical tube or wound. It is divided into a frontal region undivided where lies the animal and in a rear region divided into rooms. The animal is anchored to the shell by means of a bead which reaches all the rooms. The shell is filled with gas which facilitates the floating. Depending on the winding we can recognize various forms of the shell. The internal baffles between one chamber and another produce drawings recognizable on the outside of the shell. In the nautiloids the sutures of the partitions are always very simple. Now there are just 6 remaining species of the genus Nautilus. 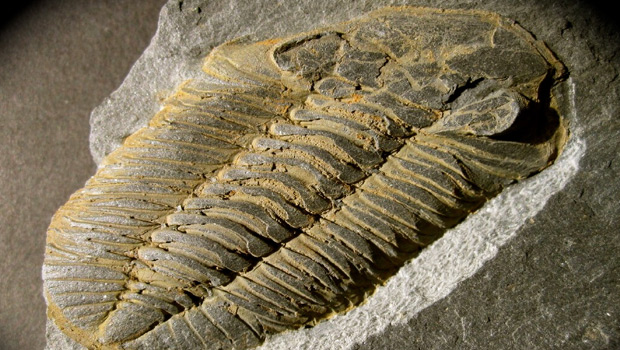 they appeare with a good variety of species from the lower Cambrian, although they undergo a strong reduction at the end of the Cambrian period. The few surviving forms generate in the Ordovician era, they are new types which differ considerably and occupy new ecological niches. With the end of the Devonian era we witness a new moment of crisis until the total extinction in the Permian.

Arthropods, i.e. animals with bilateral symmetry, covered by chitinosa cuticle and composed of many segments. The body is divided longitudinally by 2 grooves which form three lobes, a central one and two lateral ones. Transversely you notice three main portions, the front is called cephalon, the median torax and pygidium the rear area. The eyes are rather evident and often pronounced are formed from several separate lenses. The winding of the body was possible in all forms excluding the most primitive.

These were sea animals. A considerable importance of these animals in the Paleozoic, demonstrated by the numerous adaptations that have allowed the colonization of very diversified environments. They were predominantly benthic animals that tunneled in sediments and lived on the seabed. They used to eat microorganisms found in the mud.

Marine sediments, cliffs. fossils have been found in locations across the world. 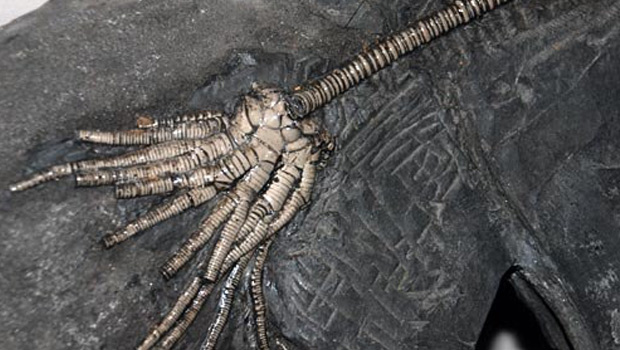 Group of echinoderms that have reached their maximum development in the Paleozoic with a mass extinction at the end of this. About 5000 are the fossil species but nevertheless also there are also 600 present species.

Also called lilies of the sea, their body is subdivided in pelma and crown. The crown is made of the reliquary and the arms which are extensions of the soft parts of the body that are anchored to the plates. The arms in the initial number of five, in the most recent forms present also 200 divisions. The Pelma comprises the structure (column or stalk), formed by segments of various shapes. Along with the column we have tabs called cirris. In the most advanced form there’s a progressive increase of the cirris.

Animals of medium and large size, there are species with long 20 meters columns.

as all echinoderms these were exclusively sea animals. They live attached to the substrate in a variety of environments, muddy calm sea, cliffs of high energy. Some have the possibility to move for short journeys, having a mobile peduncle, while others still do not possess more.

in the vast area of Saharan Africa there are deposits of rocks with numerous fossils of marine origin, among which abound the orthoceras (extinct nautiloids mollusks, diffused in the middle Ordovician) and the Ammonites (cephalopods diffused in the Devonian and extinguished in the same period of the disappearance of the dinosaurs). The fossilized marble, finely carved by hand has a size of the different types (round, square, rectangular, octagonal…) it reveals marine extinct fossils, as the Ortocone and the ammonite. The Ortocones were one of the first families of cephalopod mollusk. They lived in a cone-shaped elongated shell. These have evolved into a form of a semi-heliocoidale which would later become the ammonite.

These are limestones and residue of a paleozoic ocean. The material in each part has an aspect that is absolutely unique due to the variety of organisms fossilized. Suitable for ornamental effects, interior trims,  tables or real “mats” of marble that will highlight the fossils, giving a natural effect to the stone.